“One Step Beyond” was a little known game released in 1993 by Ocean Games. It was a sequel to a commercially acclaimed game called “PushOver”. They were both developed by the same team (Red Rat Software), both were action-puzzle games (a lot more “puzzle” than “action”) - and while the “PushOver” idea has been used in numerous popular J2ME games, JumpOff™ is the first attempt to port “One Step Beyond” to mobile Java.

I've programmed it from scratch and created new graphics, but I wanted to maintain the original gameplay.

JumpOff is a hobby project. The game is absolutely free. I would probably release its sources when the game is done. The current builds are still in beta stages of development.

The music used in the current builds is a homage paid to Amiga personal computer: title track from Cannon Fodder, composed by Richard Joseph (R.I.P), and in-game tune by Chris Huelsbeck from Turrican 2. 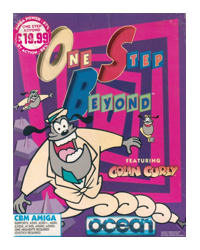 Developed by Red Rat Software, it was published in 1993 by Ocean Games for Amiga, Atari ST and IBM PC (DOS).

My name is Michal Galinski. I live in Gdynia, Poland.

One Step Beyond, which I played for the first time back in the 1993, is not my favourite game but I thought that it would be fun as a mobile game. So here it is.

Thanks for everyone, who helped me test JumpOff, especially for Pawel Klopotek-Glowczewski, Michal Olenycz and Lukasz Lewandowski.